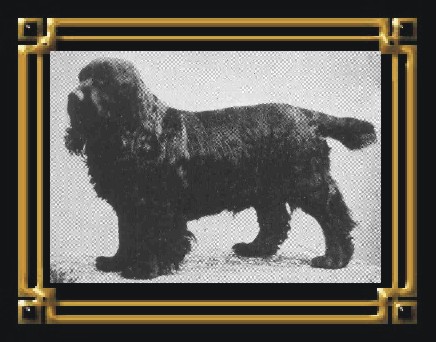 Obo II's gravesite is located on the former property of Mr. J. P. Willey (Obo's sole owner) of Salmon Falls, New Hampshire, USA. In the background of the above photo one can see the original Willey farmhouse.

This information was sent to the American Cocker Review magazine in 1980 or 1981 by Jim Trevitt who had it sent to him by Carol Bigg's. Just recently more information has come to light about Obo II's homestead. There is now an elementary school in front of the Willey property and the name of the city has been changed to Rollinsford. The original farmhouse and home of Obo II is still standing today. The city has named the street across from the Willey Farm... Willey Street after Mr. Willey. The American Spaniel Club has requested the grave to be registered at the Rollinsford Historical Society as a Historical Monument to the Cocker Spaniel.

The above picture and information came from the American Cocker Review magazine March/April 1981 and several other sources.

CH. OBO II, another black Spaniel. His mother, Farrow's Chloe II, also black, was purchased by Mr. F. F. Pitcher from Mr. James Farrow of England. The two men agreed that they would breed Chloe II to Eng. Ch. Obo prior to them sending her to America. In August of 1882 not long after Chloe II's arrival in the states she gave birth to at least 5 puppies, 3 bitches and 2 known dogs. One dog was sold to Mr. J. P. Willey and became CH. OBO II, the other was sold to Mr. J. Otis Fellows and would later become CH. HORNELL SILK, also black. Both dogs sired mainly blacks but did on occasion sire other colors. This would become quite a controversy in later years as almost everyone knows that Black is a dominant color and they couldn't understand how they would be having puppies being born other colors than the usual black. I will try and explain this as we did not know this ourselves until reading about this story in Mrs. Francis Greer's 2 Volume book set titled A Century Of Spaniels.

According to Mrs. Greer's research CH. OBO II's grandfather Bulluck's "Old Bebb" was bred to a Liver bitch from Lord Angsley breeding named Flirt. Out of this litter they would have a Liver Dog that they would later call Young Bebb, or Spurgin's Bebb. Mr. Phineas Bullock, the breeder of Young Bebb decided that the young Liver dog wasn't living up to his expectations so he sold the dog to a Mr. Spurgin in Northhampton, England. Not long after the young Liver dog was sold word began to spread that the offspring he was siring were outstanding and it didn't seem to matter what was bred to him but all the puppies were quite remarkable. Well, Mr. Bullock was Furious, he had done something that even Top Breeder's of Today do on occasion, he had let the show quality or the better breeding specimen go. For years after he said that was the biggest mistake of his life. Of course if he hadn't done this we wouldn't have CH. OBO II in our lines today, and who knows what type of dog we might have ended up with. Now the fact that CH. OBO II and his brother did on occasion sire colors other than black can be explained because on both sides of the pedigree (as you will see when you click to it) that they had the liver color dogs behind them. The Liver gene or as we call it now days Chocolate, is a Recessive gene which means, when both the SIRE and DAM carry a recessive gene for liver or other colors it is possible to have some of the puppies being born colors other than Black, even though Black is usually dominant. If you have one dominant Black parent and one who carries the recessive gene for Chocolate, Buff, or Tan points you will Never have puppies any color other than Black.

Mr. Farrow decided in a hurry to check out Young Bebb. He was mighty impressed with what he saw in the young dog. He was said to have described him as being Liver, but much darker than a Sussex Spaniel. He stood a little over 18 inches at the wither and was said to weigh about 38 pounds in good weight. He had a beautiful head with soft eye expression and long, well-feathered ears.

Young Bebb was used by ALL ACTIVE SPANIEL BREEDERS, Mr. Farrow among them. By 1897 it was written that, "It matters not what prominent Spaniel's pedigree, (Field, Cocker, or Sussex) we unravel, Bebb's blood turns up in 80% of them."

This was exciting news to my Mother and I as this means that the original founding Pillars of the Breed were actually CHOCOLATE COLORED DOGS!! This is of course our FAVORITE COLOR, with the Black and Tans running a close second!!